After months and many kilometers of training walks, it was finally time to hit the trail officially. So myself along with 15 other walkers representing Geocaching Victoria arrived at the trail for our allocated start time of 8am for 2 of the teams and 7am for the other 2.

I was excited and nervous at the same time but still apprehensive thinking about the task ahead. The weather ahead of us looked to be turning bad, so we really needed to make the best of the good weather while we had it. 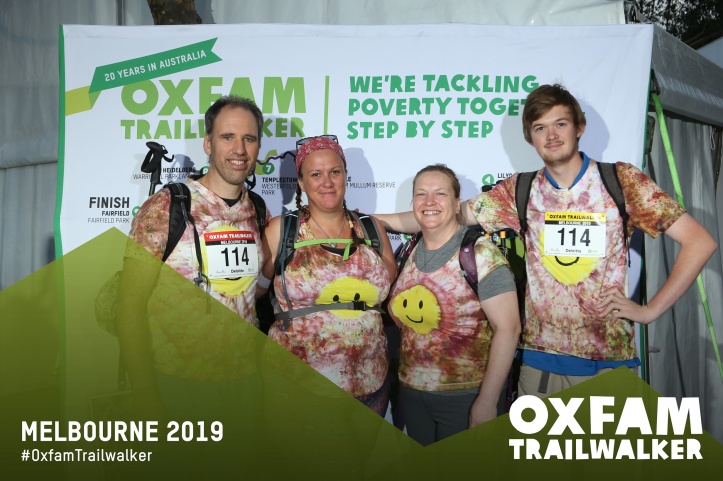 A surprise presented to us by Shaz was the team T-Shirts which were awesome and we got many comments about the “team with the smiles”, “Team Smiley” and “Team Happy”. It seemed appropriate for a geocaching team that chases smileys every time we head out caching. 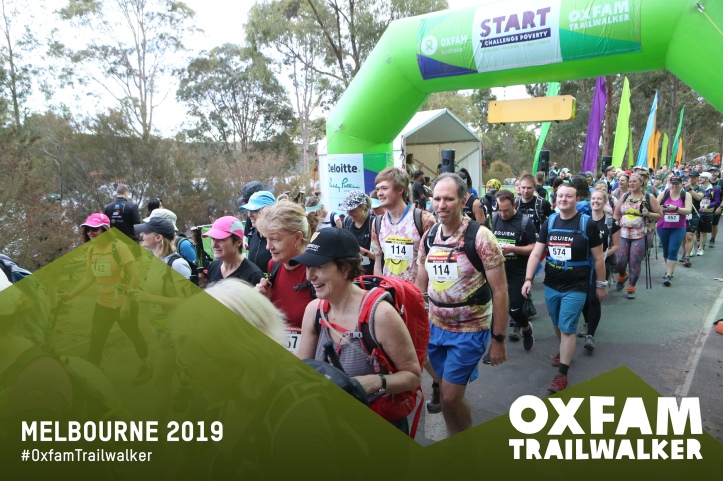 Having the hardest 2 sections out of the way early was a definitely a plus for me, but sadly Shaz was not feeling it and decided it was best for her health and well-being to withdraw at Olinda.

So, Michael, Lauren and I continued on, making our way along the trail with darkness on the way, we managed to get to our next checkpoint (Mount Evelyn) just before head torches were absolutely necessary. 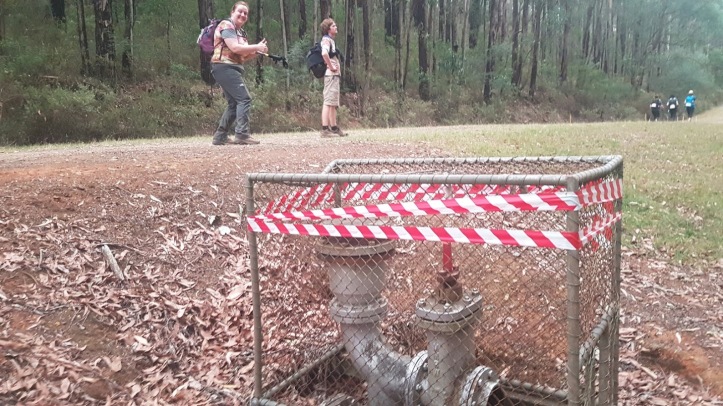 After a fast stop at Mount Evelyn, we made our way up the hill towards the Warburton Trail where the weather started to take a turn for the worse. This section, it took the form of rain, initially quite light, but gradually got harder as the stage went on. Finally easing just as we were getting off the Warburton Trail and for Michael to order the Chicken Nuggets he had been craving from Maccas since lunch time 🙂

Arriving at the Checkpoint, we were greeted by Richard and Karen who had acquired us a rock-star position and shelter very close to the check-in. I was quite hungry by now and the Pasta Karen had prepared went down really well.

Stage 5 was an unknown one for me as I had not stepped foot on it in training. It was dark, so we just plodded through it in what seemed like no time. The Hard surfaces has now started in earnest.

Arriving at Croydon, we were met by the support Crew of Richard and Karen where we checked in and out, ready for a short break before heading out again towards Mullum Mullum. I really was feeling a little second hand here, like i was about to throw up – I think it may have been the Anti Inflammatory I took along with the electrolytes I had been drinking, along with some mild anxiety. Anyway, after a quick scull of some coffee, we were on the trail again. I think the fatigue had an effect on my photo taking abilities. 🙂

Stage 6 was the longest section and had been done by both Lauren and I in Training, it didnt make it any easier tho. We plodded, at some stage bumping into Warren & Frauke from Team 2 who had just lost Neil. We arrived at the checkpoint many hours later with both Michael & Lauren the worse for wear and after a bit of a think after meeting our Support Kevin and finding the car, it was decided they would both pull out and I would join up with team 2 to enable me to continue the walk.

Stage 7 with Warren and Frauke involved rain… A LOT OF RAIN!!. Thankfully about half to three quarters of the way through, the sun started to rise and it was not long before we arrived at the next checkpoint, Westerfolds Park where the rain continued even harder once we got to the checkpoint.

Heading out of Westerfolds into stage 8, we could see the finish line in sight, there was no way I was going to DNF this one now, even if someone had to drag me across the line. Not much talk here, our feet were stinging and all our focus was one foot in front of the other. This is where the rain got particularly heavy, but luckily we were able to find a small spot inside the Oxfam tent which meant we could relax for a few minutes before hitting concrete again.

Stage 9 at the final stage, we didn’t stop too long at CP8, I think we all just wanted to get it over and done with. So a quick bite and we were off again. Excitement was here as at this point, we knew we would make it. With tracking turned on, our Family and friends knew exactly where we were and how far to the finish line.

Finally a thank you to my team, Shaz, Lauren and Michael. You pushed yourselves as far as you could, I for one am very proud of each and every one of you.

An event to the scale of this would never happen without our support crews. A massive thanks must go to my support crew, Richard and Karen as well as Kevin who did the dreaded night shift in the early hours, so thank you to you all.

Thanks must also go to the Oxfam Trailwalker Volunteers and Staff. You always had a smile for us walkers, even in very trying times.

Well, I think that’s a wrap, another Year of Trailwalker done and dusted, this was my 4th Trailwalker, I will be back at least one more time. 🙂 See you in 2020

This site uses Akismet to reduce spam. Learn how your comment data is processed.